The Warwick Square Garden is in bloom 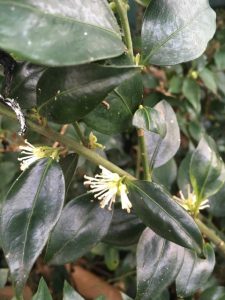 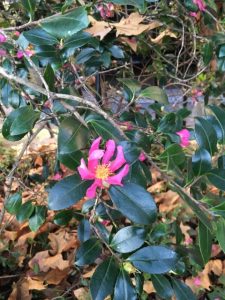 Sarcoccocca hookeriana (also known as Christmas Box) is one such plant as is osmanthus delavayi both of which are native to China.  Although it can be overlooked It grows well in dry shade and smells wonderful in the dark months of winter so perfect for the garden. 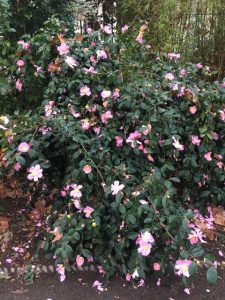 A selection of sasanqua camellias (Hugh Evans, Tanya and Plantation Pink) have been flowering in the garden since October and all are fragrant. 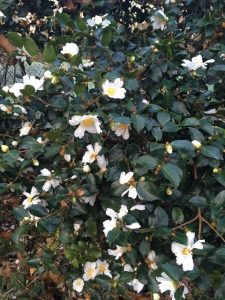 All the Camellias narumigata are fantastic this year, however the camellia sasanqua kenkyo, the one at the corner of the tennis court by the Children’s play area, is spectacular.  The name means “astonishing sight” and never disappoints.  It’s scent is reminiscent of cloves and tuberose and some days can be smelt walking on the opposite pavement.  I planted this many years ago to enhance the grey days spent sitting waiting for children to want to go home.  This will flower from October until the end of January.  The genus, camellia, was named by Linnaeus after the Jesuit botanist, George Joseph Kamel, and they originate largely from China and Japan.  There are many different varieties of camellia in the square that provide flowers from October until May. 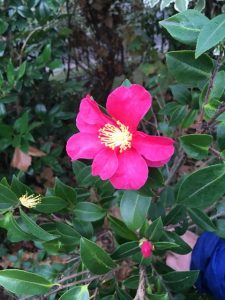 Interestingly not only is tea made from the leaves of a certain type of camellia, camellia sinensis, but in Japan camellia oil is used in hair care and elsewhere to clean and protect cutting blades.

Camellia Yuletide has lived up to its name this year and flowering well.  Last year it overlooked Christmas and we had to wait until February half term before it remembered to flower. 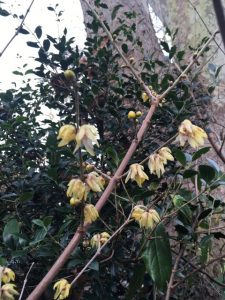 The flowers growing on bare branches that look like strange jellyfish are Chimonanthus praecox or Winter Sweet.  Originally from Western China this fulfils its promise and produces a fantastic scent.

There are viburnum for every season in the garden and the ones flowering now are Viburnum bodnantense Dawn.  For most of the year these shrubs are unassuming but in the winter they illuminate grey days and have a wonderful hyacinth scent. 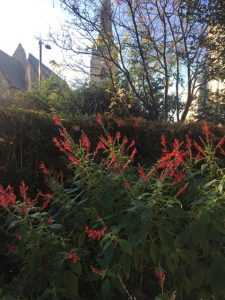 Christmas Day was the perfect day to see this pineapple sage in all its glory.  This is particular plant is a member of the salvia family (rutilans) and despite originating from Mexico and Guatemala this seems to like the shorter days and minimal sunshine.  It gets its name from the taste and smell of the leaves as if crushed one can discern the sweetness of pineapple.  Salivas are plants that have been used in medicine for centuries.  The name in Latin is salvare – to make well, heal.  Romans used salvias to increase fertility.  The leaves are used in herbal remedies to reduce anxiety, generally calm the nervous system, aid heartburn, indigestion and lower blood pressure.  In fact the perfect plant for Christmas! 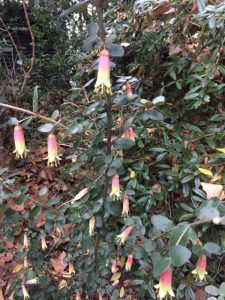 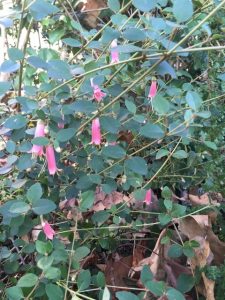 These are two of the five different sorts of correa growing in the garden.  Correa originate from eastern Australia where they grow on woodland fringes and were occasionally grown in Victorian conservatories.  One of the few silver linings to climate change means that they will now grow here in our garden.  Have you looked at the link to the interesting research that used the square as a case study by Dr. Kieron Doick for The Role Green Infrastructure plays in Mitigating the Urban Heat Islands Effect? 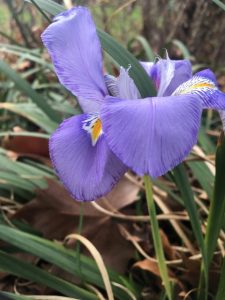 For those of us who long for blue skies and blue sea and are living in a grey city there can be nothing better than the first flowers of iris unguicularis or Algerian iris.  The name is a bit confusing as it’s also found in Greece.  It has a delicate scent and the first bees of the year go crazy for it.  This iris has rather scruffy leggy leaves that are well worth putting up with as it produces flowers from December until April. 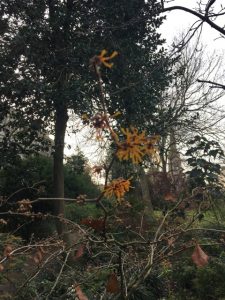 It’s been so mild that the spidery flowers of the witch hazel, Hamamelis x intermedia Jelena, have come out at least a month earlier than usual.  There are four species of the witch hazel family.  Two from North America, one from China and Japan.  This shrub in our garden is a hybrid of the Chinese and Japanese sides of the family.  No witches are involved as the word seems to be derived two sources, one from Old English wice, meaning pliant, and the other from its use as divining rods.  Its medical uses are well known and are fairly broad from sores and bruises to eczema and varicose veins.  This shrub has beautiful autumn colour too. 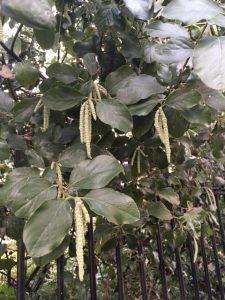 Garrya Elliptica or Silk Tassel bush, moved to Europe from California and Southern Oregon.  It has an interesting range of herbal uses from febrifuge, a very strong relaxant to anti-spasmodic.  The long silvery catkins last for months and provide good winter interest.

So to all those who haven’t fallen asleep yet or moved on to the page about property prices I hope this will encourage you to take a stroll in the garden to see some of these plants that bring a welcome splash of colour and scent in the bleakest months of the year.